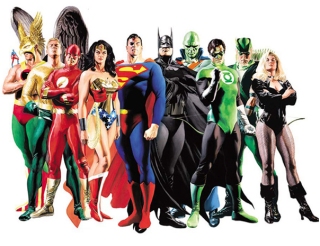 Earlier this summer I was struck by a piece of brilliance. No jokes please….

I was watching the new Green Lantern movie and learning, for the first time, about the story of the Green Lanterns. Have you heard it?  I will ‘splain. No. There is too much. I will sum up…
There are tons of Green Lanterns in the universe. Maybe not tons, but the movie showed a lot of them. They each have a “power ring” that is feed by strength of will. In fact, in the place where the green lanterns hang out there was a big swirling pot of “will” to feed the rings.* The lanterns have something to do with it, too. The point is, the true power of the Green Lanterns is their own strength and will. Cool huh?
Now, in the movie, their greatest enemy is Parallax. This turns out to be extra cool because it is a math term that I barely understand. The villain Parallax, according to Wikipedia, is the 92nd Greatest Villain of All Time. A dubious distinction to say the least. Or the most. Parallax has a variety of stories to his name, but the movie focused on the fact that his power comes from fear–the mortal enemy of strength of will. Fear limits our strength. We have to fight it by understanding not only our strength, but the fear as well. Deep stuff.
Where’s the brilliance, you ask? I realized during the movie that my little lovies need to be Green Lanterns, and that Parallax is their greatest enemy (not their 92nd). I realized how damn cool superheroes are, and I decided to go hog-wild with them this school year.  Different superheroes have been assigned as mascot to different areas of my classroom.
Green Lantern–Writing
Rogue from X-Men–Reading (more on that later)
Superman–Super Tricks for writing
Wonder Woman–Wonder Words for vocabulary
Wolverine from X-Men–the time away area or the  I-need-a-break-because-I’m-pissy area.
Thor–Thor’s Hammer of Grammar
Captain America–I’m not sure yet, but he may be riding along with The Man on the White Horse.
Ironman–I don’t know yet, but he’s cool.
As I write this, it sounds like it’s too young for my students, but it is actually manifesting quite nicely. On the first day of school we used the superhero emblems as our mentor texts.*  We created a list of what kinds of things we learned from the similarities and differences of the symbols. We talked about color, symbology (yes, a word), origins–lots of stuff.  Then we each made our own superhero symbols. Next we are going to use the characters themselves as our mentor “texts” and create superheroes. This will lead into a study of graphic novels and the writing of graphic novels.  See where this is going?  We also have a world of villains to learn about!

I needed a little boost of energy this year, and the superhero theme has done it. It goes quite nicely with my whole teachers-as-cape-wearing-superheroes thing, and the kiddos are totally buying into it.  I can just feel it.   This year is going to be… super.  Yeah, I went there.
*Note–I read up on it and it’s called the Central Battery on the Planet Oa watched over by the Guardians of the Universe.  Link here if you’d like to get similarly geeky.
*Note–A mentor text is a text that is used as an example of quality writing.  I am using the term “text” loosely here.  For more information about mentor texts either click here or keep following this blog since I’ll be bending your ear about it all year.