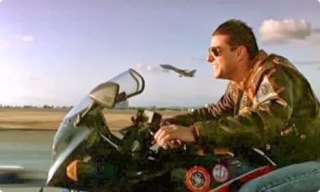 I remember my thinking clearly. I had gotten it into my head
that I was meant to be a motorcyclist. My dad had instilled the appropriate
amount of fear of what he called “hundreds of pounds of hurtling steel” and I
knew the safety class had to come first.
This shows growth on my part since I typically dive in feet first and
learn things the hard way.
I signed up for a one-day introductory class with a class
the following week if it went well.  I
was nervous, but ready. I had, in my mind, a vision of riding along the beach
like Tom Cruise did in Top Gun.  I
conveniently ignored the learning curve I was about to climb. I also
conveniently ignored what I know about myself as a learner. I need time to
observe, time to calculate, time to choose my path.  Learning difficult things in a public and
structured way is difficult for me. I knew this, but I ignored it.
We were  a small class—eight
people or so.  Most of them had been on
some sort of two-wheeled vehicle before.
I… had not.  At least not since I fell
asleep on the back of my father’s moving  motorcycle nearly 30 years earlier (don’t
worry, he caught me.  Then he banned me
from the back of his bike for EVER).  I
started to wonder if I had made a good decision.  I was there though. The learning curve had
begun.
We read some pamphlets, talked about how dangerous
motorcycles were, how they worked, how to have eyes in the backs of our heads .  Then we were allowed to sit on our loaner
bikes.  We couldn’t start them yet, but
we could sit on them.  I’ll admit, the
learning curve was going a little slow for me at this point—my mind was
starting to wander. My Tom-Cruise vision was taunting me.  After some practice getting on and off the
bikes, we finally got to start them! Vrooom!
I was back on track and engaged immediately. Top Gun, here I come!
That first day we managed to get our bikes started, ride
around in 15 mph circles, and do some zigzags. I determined that I was making
progress since I wasn’t the very worst learner in the group. By my count, I was
in the bottom third, but at least not at the bottom.  I was tense, and felt like I needed more
time, but I left that day feeling like a learner!
Two weeks later I went back for my second class. I immediately
realized my previous learning had not stuck.
I felt brand new again. I was rusty, to put it kindly.  As we started back into our 15mph circles, I
couldn’t get the hang of it.  I was
nervous and unsure—making me squeeze the handles too tightly , rev the engine,
and squeeze the brakes when I shouldn’t have been.  I was being corrected each time around the circle,
and I felt my stress level rise.  My face
was hot, my spine tingled, and my heart was beating more loudly than it should have
been.  I used my same method of
self-measurement as before—was I the worst in the group? Um… yes.  Most decidedly yes.  I just couldn’t get it. I felt my conviction
and energy drain and I started marking time until the class was over. I was
getting angry—irritated at what seemed like the constant corrections. My learning
curve had gone flat and I wasn’t handling it well. 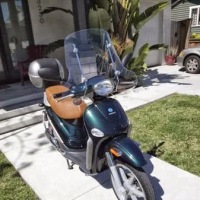 Once class ended it took me over a year to regroup and get
back on track with my goal. I ended up deciding to learn in my usual way—feet first.  I saved up and bought a 150cc scooter.  I took it to a parking lot and rode that
thing around until I had the feel for it.
Then I rode it every day on the back streets of my neighborhood, then
the larger streets, then out into the big bad world.  My learning curve was steep, but on my
terms.  I still had the sweaty palms, the
tingly spine, and the frustrations, but I was able to work them out on that
parking lot and on those streets at my own pace.
I always remember that tingly-spine feeling when I am teaching.
Challenging learning takes an extra dose
of focus, of courage, and of perseverance.
While we all agree that we need to push our student to learn in new and challenging
ways, it is also true that we need to respect and their learning process.  We can support and guide them in the process
of learning while still ensuring that the learning itself is real and rigorous. 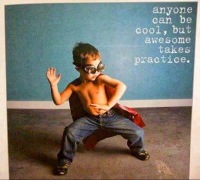 This winter, I’m taking that motorcycle safety class
again.  I’ve done the prep work, the
pre-learning, and I feel ready to learn at their pace. I still have my Top-Gun
dreams to achieve!

2 thoughts on “[Learning] Danger! Curves ahead!”