I am taking part in the Slice of Life Story Challenge with Two Writing Teachers. For this challenge I will be attempting to write a “Slice of Life” post each day in the month of March and each Tuesday after that.


My first pair of spectacles (as my pops called them) were gray, thick-framed, bifocals that turned my 6-year-old world into a visual Dr. Suess book. The once-familiar sidewalks became staggered and uneven. I walked with high steps only to realize the ground was lower or higher than I had planned. The edges of my vision were shadowed by the frames themselves which would slide down my nose at the slightest provocation. At first I pushed them back up with my whole hand–fingerprints abounded. Then my pops showed me how to use my index finger on the bridge of the frame to push them up. I resorted to wiggling my nose and contorting my face to keep them up. Not my best look, I’m sure.

Prior to receiving my glasses, school was a wild and confusing place for me. I was an early reader with a strong sense of empathy. Dick and Jane struck me as terminally dull and recess games hurt my heart on a daily basis. I often looked exactly like this: 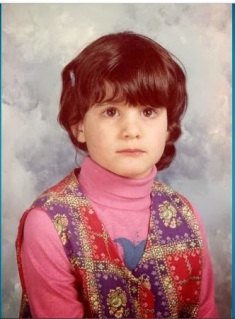 After my glasses, while recess still horrified me and the social dramas of my classmates would pull on my heart strings for years to come, I seem to have developed a wry sense of acceptance. Maybe because reading was easier and a better escape. Maybe because the frames were like a barrier to what was in front of me.

I wore spectacles steadily until 8th grade–at which point I started keeping them in my pocket until they were mangled enough that my parents noticed. My vision was tested and pronounced acceptable–I’ve been glass-free since then.

Last Friday was prescribed a pair of what I imagine are modern bifocals–progressive lenses. As I started to try on various frames I was reminded of the years my mom took me to the local eye-glass store. She tried specs on me, adjusted them, cajoled me into accepting them, and celebrated their style/flair/functionality as we left the store–quietly paying for them without a grimace.

Last week I tried on multiple pair, sorted through the choices as she used to do and then paid for them with a much more obvious grimace. I left the store with an odd mix of feelings. I felt like a kid, like a grown-up, like a smarty-pants, like a poser.

And this week, I picked up my new specs. I am much less willing to have my photo taken by a school picture guy who calls me Bubbles (Yes–Bubbles.  Every year for 8 years). And much less willing to plaster my visage on the interwebs without some artistic editing, but here they are…

3 thoughts on “[SOLSC] I Can See Clearly Now”